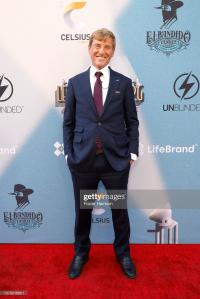 (EMAILWIRE.COM, February 17, 2022 ) CULVER CITY, CA – A simple Google search of Who is Leigh Steinberg will reveal to even the least sports-savvy individual that Leigh Steinberg is an icon in the NFL community. He is first and foremost an American sports agent with an impressive 41-year career, representing over 300 major athletes in football, baseball, basketball, boxing, and various Olympic sports.

Mr. Steinberg currently holds the record for representing the NFLs #1 draft pick eight years in a row. He is also an accomplished motivational speaker, philanthropist, and author. This past weekend, he hosted his 35th Annual Leigh Steinberg Super Bowl Party on February 12 at Sony Studios in Culver City, where the very best in sports were honored.

The list of honorees included athletes, owners, coaches and all other individuals who are striving to make are the world a better place. The coveted Steinberg-DeNicola Humanitarian Award went to the general manager of the Los Angeles Chargers, Tom Telesco.

Step and Repeat LA is an independently-owned company in the Los Angeles area, and is currently #1 in providing high-quality Media Walls and red carpet experiences for VIP events. The team at Step and Repeat LA created an impressive 10 tall by 20 wide Media Wall to serve as the award ceremonys photo-op backdrop.

Using a series of 4 wide wooden flats, each measuring 10 in height, the team united all sections to create the total 20 length. Step and Repeat LA then applied a seamless fabric print, which was created in-house at the companys facility in Shadow Hills, to stretch over the face of the Media Wall. The fabrics matte-finished properties even ensured no glare would show in flash photography!

From award ceremonies to private birthday parties, Step and Repeat LA has been creating backdrops for countless events for nearly 15 years. The company provides top-notch sales executives to handle every detail, a cutting-edge design team that creates custom-designed layouts, as well as in-house printing, production, and quality check. Delivery, setup and take-down services are also available and are done by Step and Repeat LAs experienced crewnot to mention the companys 24 hour turnaround capability!